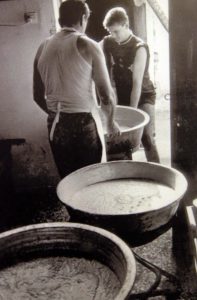 Thrace is filled with local delicacies like kapamas (lamb stew with lettuce), gardoumba (lamb innards), couscous, salt treated pork, pastrami, charcuterie, pickled cabbage in pies or with meat, lamb with rice, sutzuk lukum (turkish delights), fried pies with tahini and walnuts, syrupy sweets (like baklava, kataif etc.) and Xanthi kariokas. Stella Spanou mentions in her book “Thracian Cuisine” that “…in Thrace one meets a different gastronomical world, colourful, full of smells with intense originality, in its mountains with the sense of untouched nature, as well as its minimal villages. Thrace is a place filled with various culinary customs, since its cuisine was created through a multicultural cohabitation of people of intrinsically variable descents, with each one of them carrying their own gastronomical history. Through the local and migratory gastronomic heritages, and through a constant state of synthesis, a very artistic and tasteful cuisine was born, the Thracian cuisine.”
Everyday food in Thrace used to be very simple and mostly created with local meats and produce. During the summer the vegetable produce was the basis of the kitchen. In w 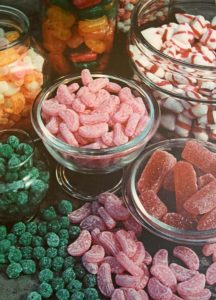 inter and after Christmas when the pigs were slaughtered, the treated meat was a large portion of the cuisine. A typical winter delicacy was kavourmas, which back then was made by mincing lean pork meat and then was put in large pots covered with lard. It is an incredible delicacy, a perfect “meze” for ouzo or beer. “Bambo” is a food for the Christmas table, where pork intestines are filled with minced or thinly sliced meat, pieces of liver, some rice, chopped leeks and various spices. It was cooked in clay pots or wide casseroles. “Barbara’s Sweet” is a classic tradition Thracian food, typically made on the 4th december on Santa Barbara’s day (Agia Varvara). It is quicked in an archaic way, using wheat, almonds, raisins and walnuts. People used to say that if the sweet turned out white, it would snow heavily that winter.
Fish lovers will find Alexandroupolis to be a point of reference for fish not only as the capital of Thrace, but in all of Greece. Suggested flavors would be scrawny “Vatos”, roasted “Gofari” (bluefish), fried or boiled “Fanaro-oura” (angler tail), “psires” (small crayfish – not like langoustines), and the aegean calamari of Samothraki. Xanthi is mostly known for its sweets, of which you should definitely taste syrupy sweets like kadaifi, baklava, ravani, ekmek, saragli, and samali, the creamy kazan dibi that’s made in a specially burned casserole just for it, tavuk giosu – the only sweet in the world with chicken!, sutzuk lukum (local variations of the turkish delights), muhalep (cream with rosewater), kariokas, and seker pare. You should also buy some delicacies to bring back home, like sweet pickles, local dried fruit and nuts, traditional pasta with fresh local ingredients, amazing cheese and milk products.

(Photos are a courtesy of Ethnological Museum of Thrace in Alexandroupolis)