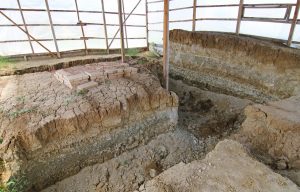 Somewhere between the villages of Mikri Doxipara, Zoni and Chelidona, at the western side of North Evros.
During the early 2nd century CE, four members of a rather wealthy family of the area died quickly one after the other, were cremated and were entombed at the same spot near the road leading from Andrianoupolis to Philippoupolis. At their funeral site, a large tomb was constructed and it hold through the centuries the memory of this dead family.
The excavation revealed 4 pits that contained the cremated remains of three men and a woman, next to numerous valuable items that were meant to escort them to the next world, ceramics, glass and brass vases, bronze lamps and lampposts, weapons, jewelry, wooden boxes and many more items. The five carriages that were used to move the dead family to their tomb was also buried with them, along with five horses! All the carriages retained fully all their metallic parts and accessories, and their wooden parts left their imprints. It was as if they existed there to continue their journey in the afterlife with the same luxury they lived. The carriages was indeed the most impressive and most unusual find of the excavation site, since it was unprecedented to have five entire carriages along with five horses being buried in a family tomb. They have even build roofing in order to protect those carriages, that hold so well, that even served as a protection for the modern excavation site. Every carriage was a bit different than the other, all decorated in detail and having different technical 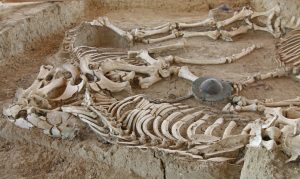 elements. In all of them the axis, the iron parts of the wheels and the parts around the axis connecting to the body of the carriage as well as other metal parts and accessories were entirely preserved. Two of them had also very clear remains and marks (imprints) of the wooden frames.
Info
The tomb of Mikri Doxipara – Zoni is still being excavated so the site is not yet optimally organized for visitors. Nevertheless from the beginning of the dig, it was decided to accept all visitors, since there was quite the interest on this unusual find, from Greeks and foreigners alike. Up to today more than 20.000 people have visited the dig site to admire the carriages, the horses and the funeral gifts.
Visitors can either come from Didimoticho or Oresteiada. For organized visits contact (+30) 25520 96033 or visit www.mikridoxipara-zoni.gr