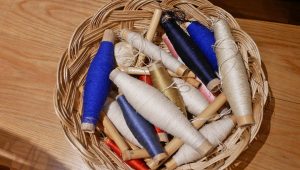 Soufli was considered as the silk town. The entire history of silk is entwined completely with Chinese folklore and myths. According to Chinese writers, the art of silkworm breeding and the subsequent silk treatment was accidentally discovered by the Empress Si Ling Chi at around 2690 BCE. After a few years China begun the extensive sericulture keeping it a secret for nearly 2000 years. This craft left China for the first time near the 8th century BCE when it was taught to the Japanese from Chinese immigrants. The expedition to the East of Alexander the Great during the 4th century BCE acquainted the Greeks with silk and its techniques,  and subsequently the Romans. The silk commerce to the West was controlled by Persians mostly during these years. Silk production and sericulture became more and more popular during the Byzantine Empire, when christian monks were specifically sent to China and Persia for this specific reason, to be trained in that craft, from the Emperor Justinine. It is said that they even smuggled large quantities of silkworm eggs, inside hollow walking canes. The largest silk centres of Byzantine era were Corinth, Thebes and the island of Kos. For centuries though, silkworm breeding and silk treating was one of the main crafts of the Vilaeti people in Andrianoupolis. Around 1823 an English corporation shown interest in buying the local silk, a fact that skyrocketed the prices of silk in the area at first and then all over Europe as the rumors spread. Coincidentally a silkworm illness started spreading all over Europe, the pepperit or nozema bombycis, that hit France and Italy hard so there was an even larger need for silk imports in these countries than usual. This created a great framework for the Thracian silk industry to bloom.
The area around Evros River is great for planting mulberry trees that played an important role in the silk industry, and soon the area was an endless mulberry grove. At some point almost every person in Soufli were working for the production, the treatment, the  refinement, or the commercial process regarding silk. By 1880  Soufli was considered the sericultural centre of the area, it grew to a large town, and had a special tax exempt status from the Ottoman Empir 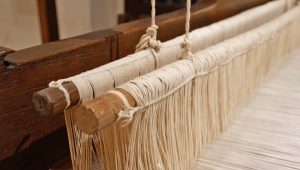 e with a Sultan Firman (law).
It was an incredible financial, commercial, cultural as well as political centre of the area for many decades to come, and reached an immense population for its time of 60.000 people. After the silk boom and the increase of the populace, it grew a secondary development pillar besides sericulture and that was viticulture. Unfortunately after the creation of synthetic silk in 1949, silkworm cocoons and silk price plummeted, and in coordination with the lack of proper industrialization of the silk processes in the area, the sericulture in the area declined fast, and people migrated. Silkworm breeding affected greatly the local housing architecture, and it is this exact unique perspective that gave what are called cocoon-houses or “bitsiklikia”.
Sources: http://history-pages.blogspot.gr/2012/10/blog-post_347.html, http://www.soufli.gr/
Photos: Soufli Silk Museum