The long and turbulent history of Xanthe has given the city an interesting cultural identity made from several elements. Today’s Old City includes most of the space that was historically accounted as the Byzantine settlement as well as the Ottoman Empire settlem 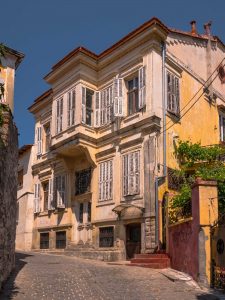 ent that was destroyed completely during the 1829 earthquakes. The architectural diversity is due to the different reconstruction phases, to the varying privileges acquired by Christians by the Ottomans, and to the influences that tobacco retailers brought from their business trips in Europe. The classic walk in the Old Town of Xanthi starts from the central square of the city and the paved Vasileos Konstantinou Street, which leads to Antika Square. From there one can follow Paleologos St. and at the crossroads with Mavromichali St. you’ll find the City Hall with the arching gates built by the Jewish tobacco retailer Moses in 1830. Next to it is the Moses Inn, a typical inn of the late 19th century in the area. Opposite to the City Hall is the building of Progressive Union of Xanthi (Filoproodos Enosi Xanthis) build in 1900. Take a right from Paleologos St to Antika St and at the Orfeos crossroad you’ll find one of the most beautiful and photographed areas of the Old City. There you’ll find the Kugiumtzoglou Mansion (1877) with its outside wall murals who has undertaken an amazing art restoration. Opposite to the mansion is the Municipal Art Gallery and the Folklore Museum. In Metropolitan Square is the Agios Prodromos Church built in 1839 with its three-story high bell tower separately built in 1897. The 1st Public School and the Stalios Kindergarten is right next to them, founded on 1881 by another tobacco trader P. Stalios. The road between the Metropolitan Mansion and the 1st Public School leads to the triangle-shaped Matsini Sq where you can find the Harsitzoglu Mansion which once used to house the Austrian Consulate and today houses the Municipal Development Agency of Xanthi. 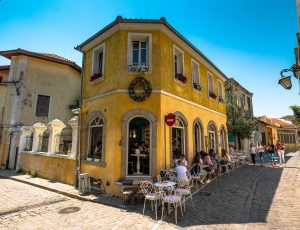 These silos were created at the southeast of the Old City between 1860 and 1912 to cover the surplus of the continuously rising cultivation of tobacco and facilitate its subsequent trade. Their architecture was influenced heavily by the buildings built during the Industrial Revolution in UK and Continental Europe. Basic structural materials were stone, wood and red bricks. Tobacco silos were also called tobacco-shops, and they functioned not only as large tobacco storage houses but as tobacco treatment places. At their basement, the tobacco leaves were dried hanged upside down, while at the other floors it was treated and then packaged in tight packs. You will find these buildings in  Eleftheria Sq and streets around it. At Kapnergaton St (“tobacco workers”) is the most fascinating complex of tobacco silos and storages houses, the famous “Π” once belonging to the Ottoman Monopoly (Regie) built at 1890.

At the eastern side of the Old City is the Samakov Neighborhood. It is an old beautiful neighborhood of Xanthi with traditional old houses of simple Balkan architecture, cheap houses for the tobacco workers, small-time employees and small tobacco traders. This neighborhood is supposed to be even older than Old City itself and it predates it, created by inhabitants of the Bulgarian town of Samakovo that migrated to the area during the Ottoman Empire.