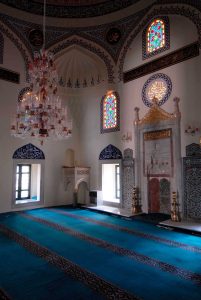 Komotini is the capital of Rhodope Region and it combines European and oriental images, smells and tastes, Christians and Muslims living together, churches next to mosques, modern apartments next to century old houses. The old Ottoman town of Gümülcine became Komotini a town in the heart of Thrace, vibrant with life, with thousands of young students from the local universities and colleges, offering amazing nightlife, culinary and living choices. The smell of freshly ground coffee (Greek or Turkish depending on who you ask), sutzuk lukums and roasted chick peas is filling the air of Komotini as you walk through it in a beautiful morning. Thrift-shops are everywhere, flea markets with all kinds of goods spread all over the pavements and small markets of the city. Don’t lose a chance to take a walk at the neighborhoods behind Orfeos Street (the main street) which are magnificent. Central Market is full of cafes, antique shops, shops with traditional and modern clothes, as well as the “tenekitzidika” which are shops selling metal workshop products, made of tin, bronze etc. The market is full of fishermen and fruit-growers and their stalls selling fresh produce. At the Yeni Tzami (New Mosque) beats the heart of the market around Ermou Street, and next to it is the Clock Tower which was build during Sultan Abdul Hamid’s reign in 1884.
At the back side of the Mosque, at the Ifestou Square you may find most of the famous “teneketzidika”. At the cobblestone roads Serron, Koraee and Lahana you will find Turkish delights (sutzuk lukum) bakers, chick pea roasters and coffee breweries, among handicraft and traditional needlework shops, antiquaries and thrift-shops. If you walk down the Filikis Eterias Road you’ll find at your right hand side the Central Market and at your left the beautiful old mosque of the city, Eski Tzami. That is where the Komotini’s Poorhouse, Imaret is located, which now houses the Ecclesiastic Museum. Imaret is a conserved monument of the city, it was founded by the conqueror of the city Gazi Evren Passah. In Sofouli Road you ‘ll find the Metropolitan Church of the Assumption of Virgin Mary which was build in the 1800s and is also a historical monument. Next to it there’s a Byzantine Fort build during the 4th century next to ancient Egnatia Odos. It used to have sixteen towers but barely any of them are intact today.

Eski Tzami is filled with small colourful beams of light passing through it’s amazing stained glass windows. White rosaries with 99 beads each are resting at the thick soft carpets. Eski Tzami is the largest Mosque in Rhodope area and the only one with two Serefes on its Minare (balconies from which the Imam is calling out to the believers). It was build in 1608 and every carpet inside it, was specially delivered due to their large scale from Proussa, the domes are painted from famous Istanbul painters, and all the ceramic tiles were brought in from Kiutahia.

Venizelou and Orfeos are the main streets full of vibrant life, cafes and numerous shops. You should take a beautiful walk and enjoy the evergreen Agia Paraskevi Grove. Visit the Folklore Museum and Agios Georgios Church with its tall bell tower, and the nearby Education Museum of Thrace.  In these streets you will find many neoclassical buildings, like the Cultural Association building or that of the Sarakatsanoi Association. Behind the Grove you may find the Metropolitan Church of the Assumption of Virgin Mary. One of the most interesting buildings of the city is the Tsanakleios School neoclassical of Eclectic Rhythm in between Democritus and Tsanakli Street.