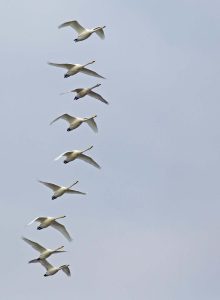 Evros is not just another river. Apart from being a natural border of Greece, Turkey and Bulgaria, it is of such importance that determined in various ways the fate of the area. In Ancient Times it was considered the largest river of the then known world, although it merely is the longest in the Balcan Peninsula. About 30kms before its estuary, Evros River splits in two creating a huge triangle. The deltaic plains inside this triangle are around 20.000ha in the Greek side and 7000ha in the Turkish side and it is a haven for numerous bird species. The Greek side of Evros Delta is part of the Ramsar Convention, Natura 2000 Network, and it is strictly protected by European and National Law.
The great value of the Evros Delta is found in its rich avifauna Here, at least 322 bird species have been observed, out of almost 444 in the entire country! It is an unprecedented amount of birds a unique phenomenon for European standards. It is a highly complex ecosystem that acts as a habitat for nesting, as a refuge for large populations of aquatic birds from the northern regions of Central-Eastern Europe during the winter, as well as a vital site for gathering and resting for a large number of migratory birds. Respectively, 46 species of fish, 7 amphibian, 21 reptilian and more than 40 mammalian species have been observed in the area of Evros. The most valuable wetlands in the Delta are its two lagoons, Drana (or Draco Lake) at around 600 ha and Palukia (or Kazikli) almost 280ha large.

* Visitation of the Evros Delta area is permitted in specific parts; you can get relative information from the

* National Park Management Authority. The eastern part of the Evros Delta is supervised by the Greek military.