Flamingos, cormorants, herons, and glossy ibises all fly in front of your eyes standing at a hand’s length – provided you approach them carefully and respectfully. 307 species of birds have been recorded in the greater area of Vi 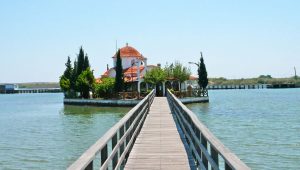 stonida Lake. Among them, the Dalmatian Pelican, the Ruddy Shelduck  the White Pelican, the Egret, the Golden Eagle, the Booted Eagle and the Long-legged Buzzard.  Its area is 4.240 acres and its maximum depth varies from 2,5m to 3,5m. Its waters are brackish, as the rivers of Kosynthos, Komsatos and Travos are constantly filling her with fresh water from its northern part, while in the south three passages allow the flow of salt water inside it. It is one of the 11 International Importance Wetlands of Greece protected by the Ramsar Treaty, and it is a special protection area according to a European Union directive. A total of 61 fish species have been recorded in its waters, though local fish farms have a preference towards the flat head mullet. To the west of Vistonida bay extend the Laphira and Lafruda lagoons. They are shallow and muddy, with brackish water also due to their contact with the sea.The legend says Vistonida was created when the King of Viston and son of Ares, Diomedes, requested from the daughter of King Minos of Crete to marry him. King Minos imposed a condition on him: she would be his if he managed to take her to his palace without ever stepping on land. The palace of Diomedes was built on the edge of a plain, the surface of which was lower than that of the sea. They dug and filled the plain with sea water and so he managed to bring his own heart to his palace. In another related story King Eurystheus asked Hercules to bring him Diomedes’ famous 4 flesh-eating horses. Hercules and his friend Avedro managed to steal them and take them to the beach. There Hercules instructed Avdiros to keep them safe while he went to defend an attack from Diomedes and his Vistones. Hercules killed Diomedes, but returning to the location where they’ve stashed the horses, he found Avdiros half-eaten by the horses. It is then said that Hercules founded the city of Avdira before transferring the legendary horses back to Mycenae.

Info
Visitors of Vistonida Lake may find it helpful to first visit the Environmental Information Center to find out where the best birdwatching locations depending on the season. It is located just outside the town of Porto Lagos. (tel. +30 25410 96646).