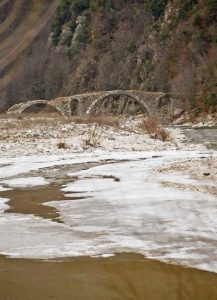 Thrace has a total of 74 arched bridges and 54 of them are located in the Xanthi Region, either single-arched, double-arched or multi-arched. Many of them are built upon the banks of the Kosynthos River and you may find them if you follow the road out of Xanthi going for Stavroupolis and Echinos. Most arched bridges are not actually used ever since 1925, when the National Road was built. One of the most unique arched bridges is the Abdul Hamit Bridge made entirely from local white-stone. It was completed in 1904 while the area was still under Ottoman Empire and that’s why it bears Islamic signs.
It is incredible how much these arched bridges has lasted in time, weather, earthquakes and natural disasters. Their architecture is rather similar with the world famous arched bridges of Εpirus. This particular way of bridge building was mostly decided by the material available in the area (mostly stones). They vary from one to six arches, depending on their height and length. The main builders of arched bridges were the stone masons from Philippoupolis, the Doulgerides, as well as several coteries of Macedons or Epirots, as Michael Passalis writes in his book “The stone arched bridges of Xanthi and Thrace”. Doulgerides were stone masons that could build everything, simple houses, mosques and minarets, churches, bell towers, and famously, arched bridges.
They called themselves “Jacks of all trades but no home”, since they were constantly traveling either alone or in groups; though groups were preferred in order to fend off raiders and brigands. Their craft was also learned and passed to locals as well, who after some years started building their own stone arched bridges.