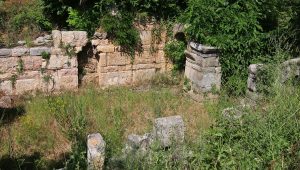 Ancient Maroneia was one of the three most important city-states in Thrace region, along with Abdera and Aenos. Its incredible size was obvious, along with the fact that it has passed a golden age, both made apparent from the excavated ruins, that are so vast that it’ll take quite some time to visit in their entirety. Ancient Maroneia extended to a very large region from Ismaros Mountain all the way down to Ptelea Lake. Many monuments and ruins are organized in sites but so much more can be found all over the area, outside of archaeological sites, among olive groves, or at the mountainous slopes of Ismaros.

It is worth visiting: 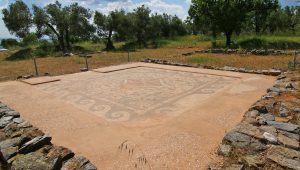 Cicones were the first people to inhabit this area at around 800 BCE. The first Greek tribes that lived in Maroneia were settlers from Chios Island 100 years after the Cicones, and co-habitated with them peacefully. The village quickly grew to an ancient city that became a commercial and nautical centre of ancient times. It had an amazing climate and wealth was pouring in because of all the merchants trading with Rhodope area. There were also silver mines there, that produced great silver coins many of them were later found in Balkans, Egypt or even Mesopotamia.
Maroneia was a democracy and it had a long golden age that stretched from Hellenistic times to the beginning of the Roman Empire. The city was transferred to its modern location during the Middle Ages, to protect its people from pirate raids.

It was built in the Hellenistic times and was being used up to the end of 7th century CE. The first row was occupied by marble thrones with various carving of titles and names of local lords. In roman times it was even used as an arena for fighting between gladiators and beasts, that’s why there were protective bars at the edges of the scene. The threatre had a capacity of 2500 spectators with 10 large amphitheatrical rows, under which a large pipe was passing bringing mountain water down to the city. The theatre had amazing acoustics, and the area that is build is called even today “Kampana” which means bell, because the sound there is clear as a bell. In 2009 its renovation was completed and the first theatrical plays were held after 1300 years of silence.