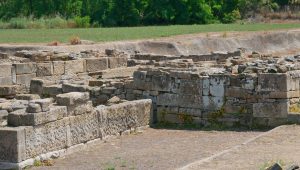 Legend  has it that Abdera was founded by Hercules in memory of his good friend Abderos who was eaten alive by the man-eating horses of Diomedes. Historically the founding of the city is put somewhere at the mid-seven century BCE, right after the migration of Klazomeneis from Minor Asia. At first the city met with constant decline and was abandoned, until it was re-founded by new settlers from the Ionian ciy of Teo in 545 BCE. It had huge fields for agriculture, and the trading with the rest of Thrace made it one of the most wealthy towns of Northern Aegean. A royal mint was founded there in order to produce the Great Alexander currency. Abdera was also the birthplace of famous philosopher and physicist Democritus, the philosopher Protagoras and other famous philosophers and poets. At a first glance the archaeological site of Abdera does not reveal the true splendor of the main city of Abdera during the classical, Hellenistic and roman eras. The uncovered part of the city is almost 300ha large and is split into a northern and southern part.

At the western side of the new port of Abdera, you may find the ancient harbour, where the ships docked at huge granite megaliths. In byzantine and metabyzantine times, the city of Abdera was renamed Polystilo from the many pillars that decorated its buildings. Some other uncovered buildings found are a Baths building, and a Diocese Church which was the most important Byzantine structure at the time, dated to the 11th -12th century CE.